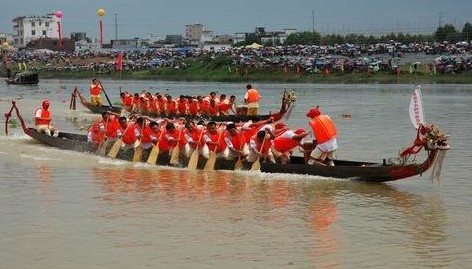 Date: June 10 to14
Place: South Lake in Yueyang, Hunan Province
Activities:
Yueyang is the birthplace of the sport of dragon boat. In 278 BC,after the Chu State had been defeated by the Qin State, Qu Yuan who is one of the great poet in China history, ended his life by drowning in the Miluo River.

After his death, people have held a grand dragon boat contest on the river every year to commemorate the world cultural celebrity. This is the origin of the Dragon Boat Festival.During the festival,people hang mugwort and changpu, put realgar guns, drinking realgar wine to ward off evil.

Yueyang city first organize the large Dragon Boat Festival (race) activities in 1987.Since then,the festival has been successfully held 10 times.It’s identified as one of 23 important Chinese festivals for the overseas market by the National Tourism Bureau.