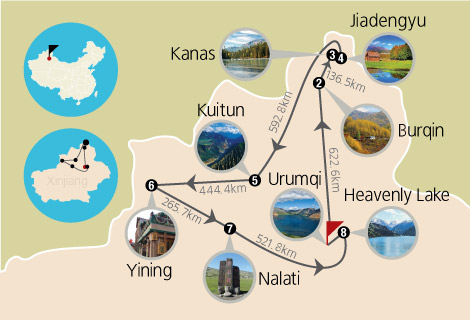 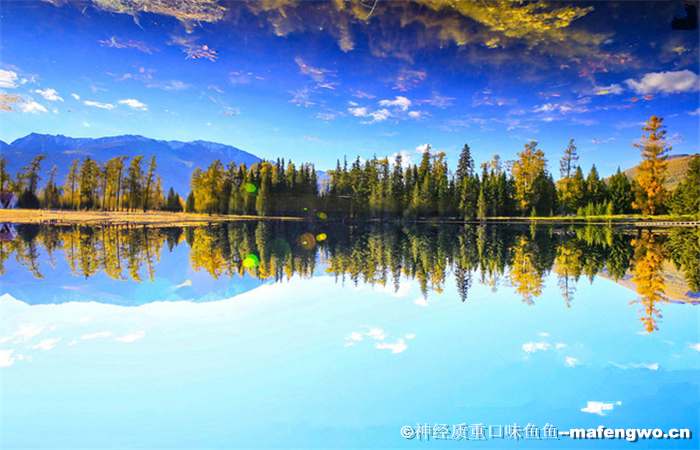 Xinjinag is a natural mosaic with stuning mountains, deserts, grassland, and lakes scatterin. This elaborately designed private Xinjiang tour starts and ends in Urumqi. Exprience nomadic life of Kazak and Tuwa people, excurse to Sayram Lake, Heavenly Lake and Narati Grassland, visiting historic ruins and local bazaar. You will miss any shining diamond along the Silk Road in this lifetime unforgetable experience.

With our private car and local tour guide, we offer you seamless transfers and a rewarding tour in the glamorous North Xinjiang.

Your thorough Xinjiang tour will start with an exploration to Buerqin, there you will view the visual grandeur of Multi-colored Bay. After a several-hour drive with excitement ,you find what in front of your eyes well worth waiting.

Facing this masterpiece of great nature in typical Yadan landform, you can not resist being captivated by the sharply contrasting views in the two sides of the Bay - they show striking colors as if a paint box has been knocked over to earth.

In the evening, stay in a local 4 star hotel in Buerqin.

Multi-coloured Bay: Located in Burqin County of Altay Region from Xinjiang Province, Multi-colored Bay is one of the major tourism attractions in Xinjiang that has attracted a lot of tourists travel there with its imposing landscapes and mysterious spectacular.

After hotel breakfast, hit the road for the mysterious Kanas Lake. Whether to relax yourself in this pure land relishing the fresh air, soft drizzle, and picturesque scenery, or seek some thrill from the story of Kanas Lake Monster - Kanas Lake is the home to Xinjiang Loch Ness- you will find your own way to soak up there.

With pack meal prepared by the hotel, have a picnic in this picturesque land, a distinct taste from restaurant dining!

Then head for Jiadengyu, the next site awaiting is Hemu Village residented by Tuvans people. In this rare preservation of ethnic group, customs including local costumes and architecture style are distinct. The wooden cabins there will offer you a unique and rustical touch.

Back to Jiadengyu, check in the hotel, have a good night in this peaceful county.


Kanas Lake: all stories about this lake have been embraced in its name Kanas, which means “beautiful, rich and mysterious” in Mongolian. Your imagination about this lake is un-capped. Lush green grasslands, dense forests in various species like spruces, birch, and Siberian larch. The lake changes color with weather and season.

Hemu Village: Hemu Village is the gathering of Tuvans. It is the biggest and farest village of the remaining 3 Tuvans Village. The houses here all are built raw wood and are full of original beauty.

Get a morning pick-up, fare forth for Wuerhe Ghost Town.

Before seting foot onto this land, you may have a ton of imagination about this mysterious attraction awaiting to be confirmed. As you arrive there, all the imagination and waiting are fully realised. The special landform and "devil" atmosphere set you into the play of a ghost novel or thriller.

Hop on a tram powered tram to circle the old huge town in ease.The tram is  to Make the most of your lay-over there for this peculiar experience hard to be found elsewhere.


Ghost Town: Ghost Town, is also named as Wuerhe Ghost Town. It has 100 KM aways from Karamay. There is a special wind-erosion landform here. The local called as Ghost Town. Actually, it is the typical Yardang Landform area. Yardang, which means "steep hill" in Uygur language.

Get a morning set off, en route to visit Sayram Lake and pass through Guozigou (Fruit Valley) Bridge, two magnificent sites by Nature and human respectively. Sayram Lake as the largest alphin lake and highest lake in Xinjiang and Guozigou Bridge, one of the highest and maybe the most remote stringed bridge in the world.

Check in the hotel in Yining.

Sayram Lake: As the largest alpine lake in Xinjiang, Sayram Lake is a fairyland with wonderful natural scenery. The lake is like a brilliant emerald inlaid in the basin which is surrounded by Mt. Tianshan. In Mongolian language, the name of the lake means "a lake on the ridge". In Kazak, sayram means "blessing".

In the morning, board the car and head for an thrilling natural wonder, Narat Pastureland.Arriving there at noon as estimated, get a fine taste of this endless green world on a shuttle bus.

If you have never visited a river bed grassland, no wondr you would be amazed by its luxuriance nourished by the black soil underneath. It seems that the pasture strectches till the horizon to connecting the ground and the sky. Visiting during September, you will be lucky to see the pasture grown to 90 cm in height.

Narat Pastureland: It is located in the area of Ili Prefecture, which is also one of the biggest grassland. It was the famous pasture from the ancient time. The grassland is full of wild flowers from June to Sep every year. You will enjoy the colorful scenery here. The scenery of grassland combine with Kazakhstan folk custom, which makes it become the famous tourist zone in Xinjiang province.

Weaving bye to Nalati, call on Yining again to get a in-depth tour within the city.

This fertile and green delta of Ili River features the capital of the Ili Kazakh Autonomous Prefecture, lavender fields in Oriental Provence Huodu, Horgos Port. This multi-culture city is home to 37 Peoples, which means you will feel the fusion of cultures whlile your visiting.

Check in hotel in Yining, have a sound rest for the exploration tour to Urumqi the next day.

Horgos Port: Horgos Pas is the land port in Yili Huocheng County. It is in the opposite of Horgos Lake. It was the important post in ancient silk road. After the foundation of New China, Horgos Lake became the biggest west port between China and Soviet Union because of its superior location.

Day 08 Yining to Urumqi
Detailed Itinerary: As you still remember, we just have a very short lay-over in Urumqi at the first day of the Xinjiang Tour. Today we will return to the embrace of this diamond on the Silk Road.

Viewing the changing landscape outside the car window,  you may start to review all the thrills you have harvest in the past days. Holy lake, ancient city, folk life unveiled in local market, you have sampled some in these categories. Yet, you still have a ton of more to expect in Urumqi. Views and activities can be as diverse beyond your imagination on this land.

Check in a local hotel in Urumqi, hold your breath for the discovery tour in the following days.
Attractions & Activities:
Meals: Hotel breakfast

In the morning, embark for an excursion to Heavenly Lake. Then transfer back to Urumqi city for an leisure afternoon city tour.

In the Heavely Lake area, take a shuttle bus service to make the most of your stay there. Visiting in summer days, this natural summer resort will offer you a cooling touch as you set foot onto it. Relishing the humid and cool air thanks to the abundant rainfall, you will hold no doubt on the honor given to this holy place, "the Pearl on Heavenly Mountain".

Activities later in the afternoon is a city tour in Urumqi. Meandering through various bazaar and markets, treat yourself with ethnical craftworks, snacks and other local specialities. Hard to find a better way to get close to local folk life than this bazaar tour.

Day 10 Urumqi to Turpan to Urumqi
Detailed Itinerary:
Today we will start an excursion to Turpan, a frequently-mentioned name when talking about Xinjiang. Explore some of the most iconic landmarks and sites, Jiaohe Ruins, Karez Well System, Bezeklik Caves and Flaming Mountain. Every minute of your stay here will be well worth for these attractions are the best windows to showcase deep historic connotation in this enchanting area.

At the end of Turpan day tour, we will transfer back to Urumqi for the departure the next day.

- Highlights -
Jiaohe Ruins: The Jiaohe ruins, is 10km west of Turpan and on top of a 30m high cliff. It is surrounded by water.

Karez Well System: The karez well system is constructed by ancient people of xinjiang, as a underwater irrigation system, 2,000 years ago during the han dynasty the basic shape is already formed, than it is passed on to middle Asia than to the Persian gulf.

Day 11 Departure from Urumqi
Detailed Itinerary: Make most of the free time before heading for the flight. Then our guide will escort you to the airport.
Your Xinjiang tour ends here. Wish you a pleasant return journey!
Attractions & Activities:
Meals: Hotel breakfast