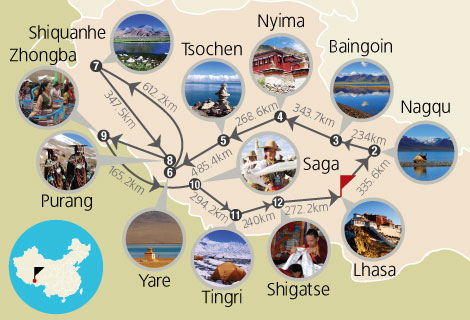 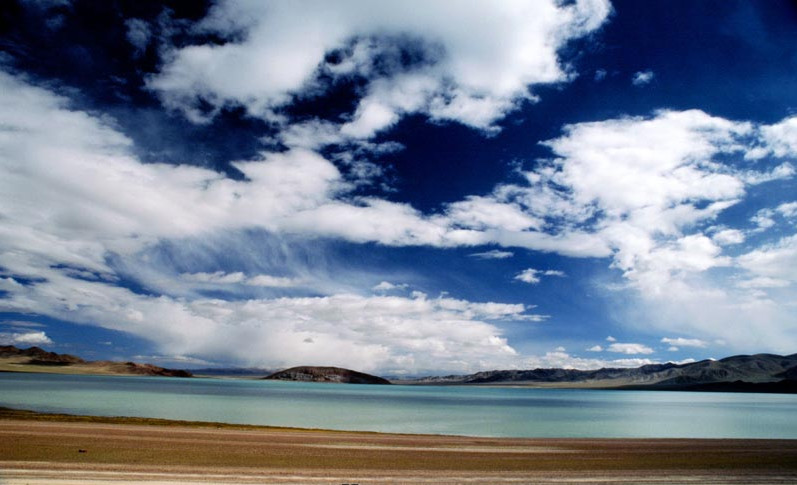 Come and take this tour with our experience driver and guide driving all the way from Lhasa to Naque, via Nagri, Tingri and Shagtse, reaching to Mount Everest at last to enjoy the spectacular scenery along the journey. Though sparsely populated yet abundant with mysterious mountains and sacred lakes, the area this tour covering will bring you extraordinary beautiful scenery and adventurous experience.

● Siling lake ● Lake Jarg ● Dagze Lake ● Dangchung Tso Lake ● Tangra Yumco ● Zhari Namco Lake ● Rinchen Shubtso ● MT.KAILASH ● Manasarovar ● Gurla Mandhata ● Lake Rakshastal ● Zhongba County ● hishapangma ● Mount Everest ● Lhotse ● Cho Oyu ● Everest Base Camp ● Yamdrok Lake
100% SATISFACTION
Free Enquiry
Day 01 Lhasa-Nakqu
Detailed Itinerary: Upon your arrival at Lhasa, our guide will pick you up at the airport. Then our guide will transfer you to the hotel and help you check in. Try to rest and drink as much water as you can to get yourself acclimatized to the high altitude. Have a good rest.
Attractions & Activities:Arrive Lhasa, move to Nakqu, check in hotel
Meals:

After breakfast at the hotel, our guide will transfer to Baingoin via Nakqu and bring you to see the enchanting Namtso Lake.

The Namtso Lake is the second largest saltwater lake in China. It is located in central Tibet and has an elevation of 4,718 meters above sea level. The Namtso Lake is an irregularly shaped lake surrounded by mountains and broad vast prairies on all sides. There also habitats rare water birds like swans, egrets, sand birds and other animals around the lake. The Namtso Lake is also a sacred place for Buddhists. Pure, solemn and stunning as Namtso is, you will enjoy its gorgeous scenery and experience its solemn beauty. We will stay overnight at Namtso Lake

Today our guide will transfer you to Nyima County and we will go to enjoy the gorgeous scenery of Lake Jargö and Dagze Lake. These two lakes with their blue crystal water, the clear sky, the majestic snow mountains and the vast grassland around will bring you beautiful views.

Lake Jargö is a plateau lake in Nagqu Prefecture located between Nyima County and Xainza County. This lake is part of the Siling Lake drainage system. It is primarily fed by Lake Urru and flows eastward into Siling Lake. Lake Jargö covers an area of 88.5 square kilometers with 27.2 kilometers long and 7.9 kilometers wide.

Dagze Lake is an inland lake in Tibet located at at a graben basin at Nyima County. This is quite a large lake with an area of 244.7 square meters. Dagze Lake is especially charming with its blue crystal water.

After breakfast, our trip will continue and our guide will drive you Tsochen. During the trip, we will go to enjoy the amazing scenery of three lakes, Dangchung Tso Lake,Tangra Yumco, and Zhari Namco Lake. We wil stay overnight at Tsochen.

Tangra Yumco is the largest sacred lake that Bon adherents believe in and worship. It is also the third largest lake in Tibet with an area of 1,400 square kilometers, a length of 70 kilometers and a width of 20 kilometers. Its elevation is over 4,600 meters.

Today we will go on and you will be driven to Yare Township. During the trip, our guide will bring you to visit Rinchen Shubtso to enjoy its enchanting beuaty.

Rinchen Shubtso, also known as Renqingxiubu, is a salt lake in Zhongba County in the Shigatse Prefecture of the Tibet Autonomous Region of China. It is located about 45 kilometers northwest of Taruo Lake and southeast of Ang Laren Lake. It is 21.5 kilometers long and 16.4 kilometers wide and has an area of 187.1 square kilometers.

Shiquanhe Town is situated in western Tibet. It seats the administrative authority of Ali Prefecture and is the political, economic, cultural and communication center of Ali. Shiquanhe Town gets its name by the Shiquanhe River which flows through the town. Though the town is located in a wild gobi desert, the Shiquanhe Town has become a modern Chinese-style town. Here at the town, you will not only have the chance to enjoy the mysterious and spectacular scenery of the plateau and snow mountains, and experience the unique local life and culture of Tibetan and the modernized culture.

After breakfast, our guide and driver will drive you to Burang County. During the journey, we will go forward to see Mount Kailash, Lake Manasarovar, Gurla Mandhata and Lake Rakshastal.

Mount Kailash is the main peak of Kailas Range, which is regarded as the most sacred and holy mountain in Nagri region and it is one of the Buddhist sacred land. The sacredness of Mount Kailash lies in its irregular geographical features. Its sunny slope is snow-covered all the year round, but its shady slope is almost clean from snow. Even covered by snow, they will melt immediately when the sun rises. This mysterious feature is opposite to natural rules, plus its magnificence and solemnity with strange rocks, valley, ancient forests and clean streams, it empowers visual and spirit impact on people.

Lake Manasarovar lies in the east of Burang County of Nagri region and the north of Mount Kailash. It is considered as the “Center of the World” by Buddhism and Bonism. It is a freshwater lake with the biggest clarity in China. It is ultra clean and blue with quiet and beautiful surroundings and sacred temples around. Lake Manasarovar is a holy lake for pilgrims. Every summer and autumn, many pilgrims come here to worship this lake. They wash away bad fortunes and evil in this sacred lake so that they will be safe and healthy.

Gurla Mandhata, or Naimona'nyi or Memo Nani is the highest peak of the Nalakankar Himal, which is a small subrange of the Himalaya. It is located in Burang County of the Ngari Prefecture in the Tibet Autonomous Region of China, near the northwest corner of Nepal.

Lake Rakshastal is a lake in Tibet, lying just west of Lake Manasarovar and south of Mount Kailash. The name of the lake literally means "lake of the demon" in Sanskrit. It is also known as Ravana Tal, as it is considered to be the place of severe penance by Ravana, the demon-like egoistic King of Lanka in Hindu theology.

Continue our tour and we will drive to Zhongba County today. Zhongba County is a county of Shigatse Prefecture in Tibet. It is located in the western Tibet and is the largest county in Shigatse. Though remote, Zhongba County has spectacular landscape of snow mountains, glaciers, rivers, lakes and plateau.

After breakfast at the hotel, we will continue our trip. We will drive to Tingri and we will pass by Saga. During the journey, we will enjoy the imposing sights of majestic mountains, including Shishapangma, Mount Everest, Lhotse and Cho Oyu. We will stay overnight at Tingri.

Shishapangma, also known as Gosainthān, is the fourteenth-highest mountain in the world. It is the last 8,000 meter peak to be climbed, due to its location entirely within Tibet and the restrictions on visits by foreigners to the region imposed by national Chinese and regional Tibetan authorities.

Mt. Everest with the altitude of 8,844.43 meters is the highest mount in the world. Its imposing mountain peaks and spectacular views have made Mt. Everest a popular tourist site and mountain-climbing destination around the world.

Lhotse is the fourth highest mountain on Earth and is connected to Everest via the South Col. Lhotse means “South Peak” in Tibetan. In addition to the main summit at 8,516 meters above sea level, Lhotse Middle (East) is 8,414 meters and Lhotse Shar is 8,383 meters. It is located at the border between Tibet and the Khumbu region of Nepal.

Cho Oyu is the sixth highest mountain in the world at 8,201 meters above sea level. Cho Oyu means "Turquoise Goddess" in Tibetan. The mountain is the westernmost major peak of the Khumbu sub-section of the Mahalangur Himalaya, 20 kilometers west of Mount Everest. The mountain stands on the Tibet-Nepal border.

Today our guide will transfer you to Everest Base Camp and you will have sufficient time to enjoy the imposing and spectacular scenery of Mount Everest, and take fantastic photos of the mountain. We will stay overnight at Everest Base Camp.

After breakfast, you will go to enjoy the fabulous scenery of Yamdrok Lake. The Yamdrok Lake is one of the three largest sacred lakes in Tibet, with the other two being Namtso Lake and Lake Manasarovar. It is the largest inland lake on the northern foot of Himalayas with a surface altitude of 4,441 meters. Yamdrok is reputed for its beautiful and charming scenery of pure lake, snow mountains, islands, vast pastures, hot springs, wild animals, monasteries and other landscapes. There are numerous islands around and in Yamdrok Lake, among which dwelling birds and fish.

Afterwards, we will go on our way to Lhasa. When arrived at Lhasa, our guide will bring you to the hotel and help you check in. Have a good rest.