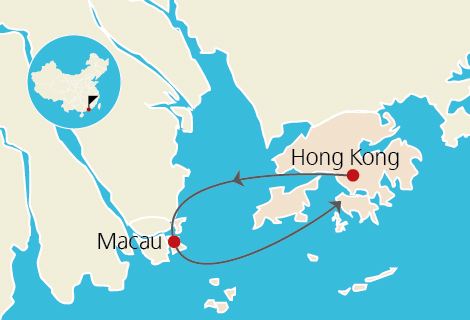 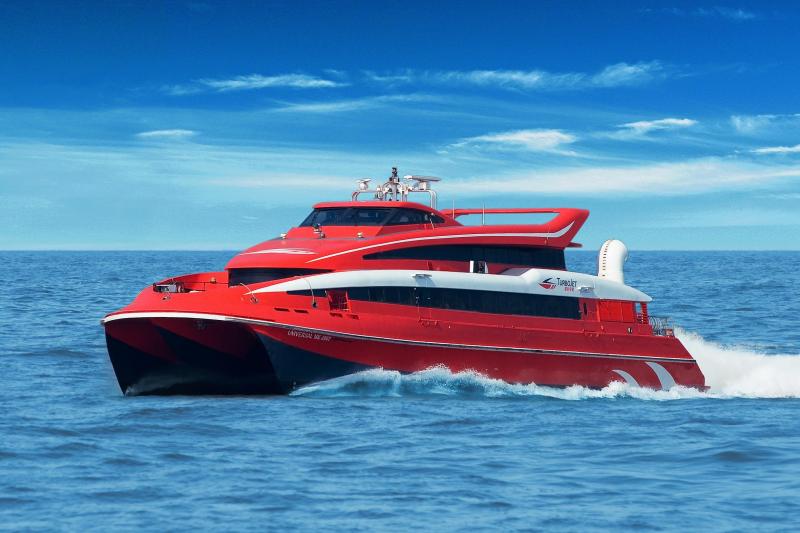 This tour is a classic family vacation for Hong Kong and Macau. The hotel you will stay at is Rosedale Kowloon Hotel which is a modern 4 Star business hotel located in the busy district of Tai Kok Tsui. The hotel is only a 10 minute walk from Exit B of MTR Olympic station.

Book Now
Day 01 Arrival in Hong Kong
Detailed Itinerary:
Once you arrive at Hong Kong Airport redeem your paper ticket for the shuttle bus at counter B01 at the arrival hall. The bus leaves every hour and the journey is about 45 minutes to the hotel. After the tour you will be transferred back to your hotel by coach.

- HIGHLIGHTS -
PEAK TRAM
Operated for over 125 years, there's nothing in the world like riding the 373 meters long Peak Tram to visit the Victoria Peak. Many skyscrapers buildings you passed by look like they leaning at a 45 degree angle!
THE SKY TERRACE
Standing at 428 metres above sea level, it is the highest viewing platform in Hong Kong offering a stunning 360-degree panoramic view across Hong Kong, including Victoria Harbour.

ABERDEEN FISHING VILLAGE
Aberdeen Typhoon Shelter is an old traditional fishing village which is hard to find in any other parts of the World. You may gain a deeper insight of the lifestyle of Hong Kong fishing folks by riding on a sampan (at your own expenses).
STANLEY MARKET
Stanley market is a Shoppers' Paradise where you can find a wide variety of souvenirs such as silk, garments, sportswear, Chinese artwork and accessories.
TSE SUI LUEN JEWELLERY FACTORY TSL is one of the few merchants that received the 2011 Outstanding QTS Merchant Award for more than 10 years and counting. Known for offering a wide range of products from quality cut diamonds to outstanding original design handcrafted jewellery, a visit to the TSL factory will give you an exclusive first-hand experience on its state of art jewellery facility.

RICKSHAW OPEN TOP BUS RIDE
You will explore many heritage sites of Hong Kong with a 540-degree panoramic view on this double decker.

Day 02 Macau Tour
Detailed Itinerary:
Your tour guide will meet you at the hotel lobby at 7:50AM and you will be transferred to Hong Kong Ferry Terminal to take the ferry to Macau. Upon arrival in Macau you will take a sightseeing tour which includes several UNESCO World Heritage Sites.
Once the tour ends you will be transferred to take the ferry back to Hong Kong and the take a coach back to your hotel.

TEMPLE OF A-MA (UNESCO HERITAGE)
The temple was built 400 years ago in homage to a girl who saved A seamen's life. The temple is one of the most famous Taoist temples.  Macau was later named by the Portugese settlers in mid-16th Century. This temple has become a World Heritage in 2005.

RUINS OF ST. PAUL'S
In the heart of the old city stands the great carved stone facade of St. Paul's, which, with the grand staircase, are all that remain of the first church and Colleague of the Jesuits in China.  Designed by an Italian Jesuit, the church was built in the early 17th century.  In 1835 a fire destroyed all but the facade.

NA TCHA TEMPLE (UNESCO HERITAGE)
This Chinese traditional styled temple known as Na Tcha Temple was built for worshipping Na Tcha (a mythical character). The temple was enlisted as a World Heritage in 2005. The temple is located just behind the Ruins of St. Pauls.

SECTION OF THE OLD CITY WALLS (UNESCO HERITAGE)
This surviving segment of City Wall was built in 1569. It is a remnant of an early Portuguese tradition of constructing defensive walls around their port settlements. It was enlisted as a World Heritage in 2005.

MOUNT FORTRESS (UNESCO HERITAGE)
The fortress was Macau's principal military defense structure which was built in conjunction with the Jesuits form 1617 to 1626. The fortress covers an area of 10,000 square metres and is in the shape of a trapezoid. It has became a UNESCO World Heritage Site in 2005.
MACAU TOWER (Admission on own expenses)
Soar to a breathtaking 223 meters above the ground. Macau Tower offers you a different vision of the entire city. Gaze out over to Cotai Strip, look for Macau's landmarks and historical sites all in one spot.

It offers the best view of Macau and has been awarded "Best Theme Attraction in Asia Pacific" for 2005 & 2006 by TTG Asia – Macau Tower. For those with fear of heights, there are also souvenirs shops, Mocha clubs (machine based casino gaming) and coffee shops located at the ground floor.

CASINO
Casinos in Macau offer a large variety of casino games that give versatile entertainment to visitors. Try your luck! No picture taking is allowed inside the Casino.   We will visit SANDS CASINO.

Some of our clients do not want to enter into the casino due to personal or religious reason.  It is OK.  Kindly remind you this is a group tour, the casino visit is included in the itinerary.  Those who do not enter the casino can rest outside the casino and wait.

* Please bring along passport and return air ticket for immigration entry at Macau.

Day 03 Hong Kong Ocean Park
Detailed Itinerary: This morning after breakfast at the hotel you will be picked up from the hotel and transferred to Ocean Park for the day. You will be transferred back to your hotel at about 5:30PM.


Shark Mystique
Come to the all-new Shark Mystique exhibit at Ocean Park to unmask the mystery of sharks, uncover the many misconceptions we have about them, and realize their vital importance to the oceans!  Start your journey at a sustainable coastal village before venturing deep into the waters to meet over a hundred sharks and rays of different species.

Polar Adventure
Take the Arctic Blast to Ocean Park’s latest chill zone and experience the Polar Adventure! Learn about life in the North and South Pole from its animals! Here you can see some of the animals such as the different species of Penguins, Stellar Sea Lions, Spotted Seals, Pacific Walruses, Arctic Fox and Snowy Owls.
Old Hong Kong
Be mesmerized by the colors and activities of life in Old Hong Kong where you can see the authentically recreated streets and scenes. Let the wonderful aroma of gourmet on the streets guide you to the market place, where you can feast on numerous delights from Hong Kong’s old street.
Thrill Mountain
You will feel your adrenalin pumping at Thrill Mountain with the Hair Raiser a floorless rollercoaster. There is also the exciting Mine Train, Raging River and Space Wheel, all these rides will surely have you in a twist!
Rainforest
Take a plunge down the Rapids at Rainforest. Enjoy a raft journey and battle fierce river rapids to meet some of the Amazon's most fascinating animals, including Pygmy Marmoset, Capybara, and other wildlife.
Aqua City
Explore the world-class Grand Aquarium in Aqua City and enjoy Symbio, the world’s first 360 degree water screen show! You can also enjoy the Sea Life Carousel that 61 carriers in 13 different designs.

Day 04 Depart from Hong Kong
Detailed Itinerary: After breakfast you will be picked up from your hotel and transferred to the airport.

If you have booked an afternoon or evening flight and have time to spare, we suggest you can visit the following attractions before heading to the airport.

Temple Street
Known as Men's Street. It is a street located in the areas of Jordan and Yau Ma Tei in Kowloon. Popular with tourists and locals, The market opens at 2:00PM in the afternoon, but is lively at dusk daily.
Tung Choi Street
Known as Ladies' Market or Ladies' Street. It is a street situated between Boundary Street and Dundas Street in Mong Kok, Kowloon. It ] is one of the most well-known street markets in Hong Kong, where various kinds of products are available for cheap prices (not just for women, as its name suggests).
Important Notice:

We will pick you up from the lobby of Rosedale Kowloon Hotel.  The airport shuttle bus depart time is: 11:55, 12:55, 13:55, 14:55, 15:55, 16:55.   The driving time is 45 minute, so you should take a bus 3 hours prior of your flight depart time.  Please tell us which shuttle bus you need to book.
If your flight time leaving Hong Kong is before 3:00PM, we recommend you to take MTR to Kowloon Station, then take Airport Express Train.
Attractions & Activities:
Meals: Hotel Buffet Breakfast

1) Seat-in-coach tour service
We have air-conditioned shuttle bus service, pickup from airport and hotels.  Our sightseeing tours are escorted by English peaking tour guide.  Tours are available everyday.
*  A minimum of 2 Adults per booking is required.
*  For confirmed booking, your reserved hotel rooms, land transfers and tours are final and incur 100% cancellation penalties
*  The Airport Express service is from 6:00 to 23:00. If your flight time is not matched with the service hour, please arrange your own airport/hotel transfer, and optional cost will be on your own.
*  Adult price is based on twin/triple share of a hotel room
*  Child price is based on child without extra bed
*  If you need one adult in one room, a single supplement will be charged
*  If you need an extra bed for child, an additional cost will be charged
*  Please notice the hotel allows only a maximum of 3 people to stay overnight in one room

2) Airport to hotel shuttle bus
Our airport counter service time is from 07:00 to 23:00.  The location is counter B01, arrival hall.  Please show your passport to redeem your bus ticket here.  Our staff will help you.

Each passenger (except an infant) can check-in a maximum of 2 pieces of baggage, total dimensions per bag shall not exceed 158 cm (62") .  Over sized and excess baggage are subjected to the availability of storage space on coach, and surcharge will be levied.

If your arrival flight time is earlier before 07:00, or later than 23:00, please arrange your airport/hotel transfer by yourself.  The extra cost for airport to hotel private transfer by a 7-seater van working between 2300 to 0700 is USD110 one way.  The taxi fare is about USD60.  Please notice this extra tranfer fare will be paid by you.

If your flight time leaving Hong Kong is before 15:00, we recommend you to take MTR to Kowloon Station, then take Airport Express Train.  Your hotel is in 10 minute walking distance from Exit B of MTR Olympic station.  The optional ticket fare for MTR and Airport Express will be paid by yourself.

5) Single Supplement
Single supplement will be added only if you travel alone.

6) Cancellation Policy
All sales are final and incur 100% cancellation penalties.

8) Tour Only
If you have booked hotel room by yourself, you can also book our tour and airport to hotel transfers when you choose "Tour Only".

Please first check our hotel pickup list.  We pickup from many hotels.  If you can not find your hotel in our list, we will recommend a nearby hotel to join in our tour. When you submit for "Tour Only", please tell us your hotel name and address on reservation.

We will charge USD 70 per child of 1-3 years old without bed. Why? This child is free of charge for almost every cost except ferry ticket two ways Hong Kong / Macau.  The ferry company requires all children aged 1 or above must travel with valid ticket, so if you have a child of 1-3 years old, we will ask you to pay USD70 extra.