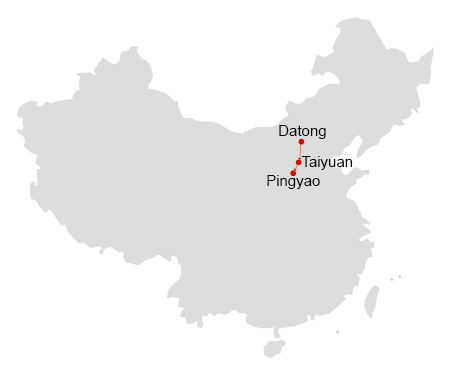 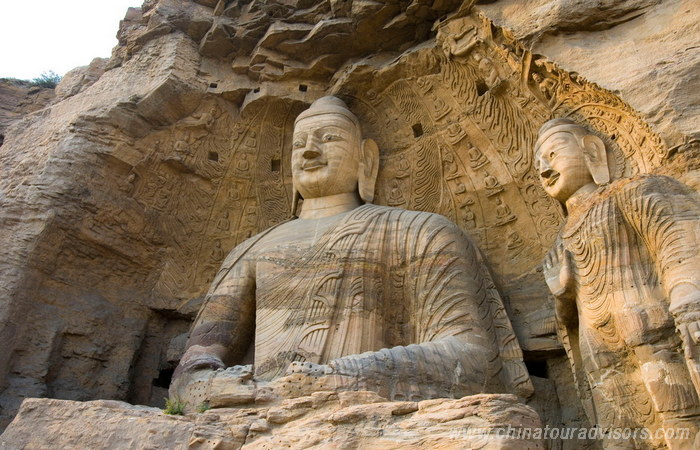 Shanxi Province boasts a long history and glorious culture. This tour takes you to visit cities of Datong, Pingyao and Taiyuan, where you will experience the essence of Shanxi ancient culture by way of Buddhist architectures and temples, Shanxi merchant culture and Yungang Grottoes.

● Yungang Grottoes ● Huayan Temple ● Nine Dragon Screen Wall ● Shanhua Temple ● Hanging Temple ● Pingyao Ancient City ● Qiao Family Courtyard ● Jinci Temple
100% SATISFACTION
Free Enquiry
Day 01 Arrival in Datong
Detailed Itinerary: Our guide will meet you at the airport or the train station of Datong and then transfer you to the hotel for check in. Enjoy the remainder of the day.
Attractions & Activities:Meet at Datong train station or airport, then drive to your hotel.
Meals: No meal

Today your Datong exploration will begin with a visit to Yungang Grottoes. Yungang Grottoes are one of China's Great Grottoes which were built 1,500 years ago. There are 45 caves opened for visit with thousands of Buddha statues seated. These delicately carved Buddha statues are of different sizes, different expressions and postures. These lively statues with rich and impressive expressions are truthful reflections of the life in the ancient North Wei Dynasty. When you are enjoying these art works of stone carving, you would also be impressed by the profession and wisdom of the ancient people who made these statuses.
Then we will move to visit Huayan Temple. The Huayan Temple is the largest and most perfectly preserved temple of the Liao (916-1125) and Jin (1115-1234) dynasties in China. The temple is consisted of two parts, the upper temple and the lower temple. You will see the compact layout and the splendid construction in the upper temple, and appreciate treasures of painted carvings and wooden sculptures of the Liao Dynasty and other relics in the lower temple.

Next our trip will be extended to Nine Dragon Wall. Datong Nine Dragon Wall is built in 1392 during the reign of Hongwu of the Ming Dynasty and is the largest and the oldest Nine Dragon Wall in China. With reliefs of nine dragons of different vivid postures and colors, the Nine Dragon Wall in Datong provides unique aesthetic artifacts of the Chinese imperial culture to appreciate.
The last attraction to visit today will be Shanhua Temple. The Shanhua Temple is located in the southwest of Datong City. The temple was firstly constructed in Tang Dynasty and was rebuilt in Jin Dynasty (1115-1234) after it was destroyed in Liao Dynasty (916-1125). The Shanhua Temple is consisted of Daxiongbao Hall, Sansheng Hall, Puxian Pavilion, Wenshu Pavilion and Main Gate. As the best-preserved temple of the Liao and Jin dynasties, the solemn Shanhua Temple stands out by its grand construction and spiritual background among Buddhist temples. Afterwards, our guide will take you back to the hotel for a good rest.

After breakfast, our guide will take you to see the architectural wonder of Hanging Temple. The Hanging Temple, as the name suggests, is a temple hanging somewhere not built on the ground. Constructed according to the natural layout of the cliff on the basis of mechanics, this temple is actually supported by crossbeams which are fitted into the cliff. With a complex of three religious halls and 40 rooms, this temple is linked by mid-walkways from the left to the right. There are clay sculptures, stone carvings, copper and iron statues characterized by Taoism, Buddhism and Confucius. The odd structure, crafty design, bold construction, artistic value, and the combination of Taoism, Buddhism and Confucius have made the Hanging Temple an architectural wonder and hot attraction.

Afterwards, our guide will take you to the hotel and help you check in.

After breakfast, our guide will pick you up and bring you to visit Rishengchang Exchange House. Richangsheng Exchange House was firstly opened during the Ming and Qing Dynasty to provide banking business for Shanxi merchants. It is the first money exchange house in China and is considered as the founder of modern banks. As a production of the prosperous culture of Shanxi merchants, the architecture of Richangsheng is an outstanding representative of local Shanxi culture. It is a combination of architectural art and function that applies the traditional style of local folk houses and also the features of local business shops. You will trace the past prosperity and glorious history from the house.

Next you will have a free exploration at Mingqing Street. The Mingqing Street located in the Ancient Pingyao City was the commercial center of Pingyao during Ming and Qing dynasties. With a length of 750 meters, this well-preserved ancient street is lined with traditional folk houses and shops built during the Ming and Qing dynasties. Along the street, you will experience the prosperous atmosphere of the history, and appreciate the ancient style and features of the residences. At the same time, you will find unique and special antiques and souvenirs in shops along the street. The local delicious food provided there is also something should not be missed out.

Then our guide will bring you back to the hotel for a good rest.

After breakfast at the hotel, our guide will drive you to Taiyuan and take you to visit Qiao's Family Compound. Qiao’s Family Compound is a large complex of private residences situated in Qi County of Shanxi Province. It was firstly built during the Qing Dynasty. With a construction area of 4,175 square meters, this magnificent compound comprises of 6 main courtyards, 20 smaller courtyards and 313 rooms. Distinguished for its characterized North China folk houses, now the Qiao’s Family Compound is converted into an architectural museum where you will appreciate the intricate layout and crafty design. The high artistic craftsmanship in the wood carvings, brick carvings, murals, tablets and furnishings fully show the essence of the compound.

Then our guide will bring you to the hotel and help you check in.

This morning our guide will pick you up and bring you to visit the famous Jinci Temple. The Jinci Temple is an ancient ancestral temple which was firstly built 1,400 years ago. After expansions in the late following dynasties, Jinci Temple has a collection of over 100 halls, towers, pavilions, terraces, and bridges, sculptures, gardens and buildings in diverse architectural styles.

Then our guide will escort you to the airport for your departure flight. Wish you a pleasant trip back home!

* This is a private tour, only you and your family or friends will be in this tour. If you need any changes of itinerary or hotel ect., please just contact with our tour advisors, we can adjust the tour for you.
* Prices may vary according to your travel time and are higher in the high season, e.g. Labor’s Day (Apr 29-May 5, 2014), China National Day Holiday (Sep 29-Oct 8, 2014), and Chinese Spring Festival (Jan 28-Feb 7, 2014). * If only one person is traveling then the single room supplement is not required. If, for example, three people book a hotel, with two in one room and one in another room, the single room supplement must be paid.  * You will enjoy more discount if there is more people join the tour.