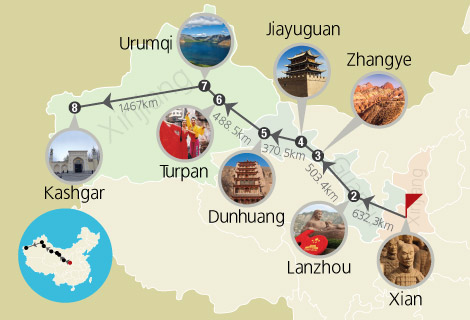 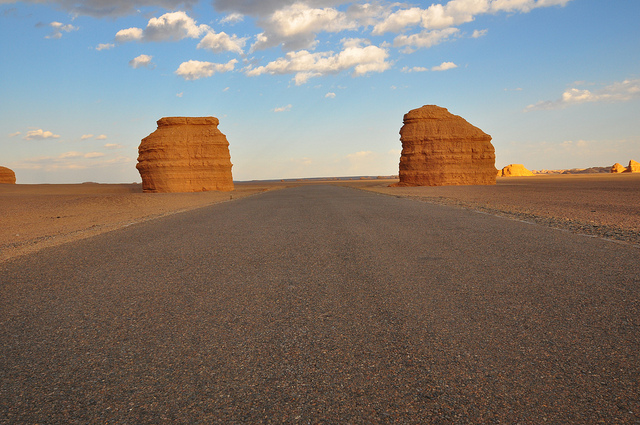 Day 02 Terracotta Army Tour
Detailed Itinerary: In the morning, our guide will pick you up at your hotel and transfer you to visit City wall, Terra-Cotta Warriors and Horses.

Xian Muslim Street: The Muslim Street, also known as Huimin Street or Muslim Quarter, is a famous and popular tourist spot to experience the authentic Muslim culture and try various delicious Muslim food and snacks in Xian. The Muslim Street is a Muslim community located in the north of the West Street in the city center of Xian. It is consisted of blocks of Beiyuanmen Street, North Guangji Street, Xiyangshi Street and Dapiyuan Street.

Day 04 Lanzhou to Zhangye by Coach (6 hours)
Detailed Itinerary: Morning enjoy a leisurely walk at the Waterwheel Garden, the garden is comprised of two waterwheels, a cofferdam, the recreation area and a house of water mill. Photo stop at Mother River Statue and visit: Lanzhou Zhongshan Brigde, then transfer 6 hours to Zhangye for check in.

Lanzhou Waterwheel Garden: The Waterwheel Garden is located at the Middle Binhe Road (Binhe Zhong Lu) in Lanzhou, Gansu Province, it was built in 1994. The garden covers an area of 1.45 hectares (3.58 acres) and consists of two waterwheels, a cofferdam, the recreation area and a water mill.

Lanzhou Zhongshan Bridge: Zhongshan Bridge, also called the first bridge over the Yellow River, lies at the foot of Bai Ta Mountain and in front of Jin Cheng Pass in Lanzhou city, the capital of Gansu Province.

Jiayuguan Pass is the first pass at the west end of the Great Wall of China and was built during the Ming Dynasty. Located 6 kilometers southwest of Jiayuguan City which is in Gansu Province, It is the western terminal of the world famous Great Wall.
Overhanging Great Wall links Jiayuguan with the Black Mountain (Hei shan), lies 8km northwest from the Jiayuguan Fort. This part of the Great Wall was first built in 1539 during the reign of the Ming Dynasty emperor, Jiajing. It was designed as an additional military defense for the fort.  The existing 750m Overhanging Great Wall was rebuilt in 1987.
Attractions & Activities:Jiayuguan Pass
Meals: Hotel Buffet Breakfast,Chinese Lunch

Crescent Moon Lake: It is surrounded by the Echoing-Sand Mountain, Crescent Spring can be called a natural wonder in the Gobi Desert. Some say it reminds them of the eye of a beautiful woman, lucid, beautiful and amorous. Some say it looks like the mysterious, gentle and seductive lips of a pretty woman, or a slice of lush, sweet and crystal cantaloupe. Actually, it resembles a crescent fallen down into this desert.

Echoing Sand Mountain: Singing Sand Dunes is a famous scenic spots in Dunhuang. It is also called Mingshan Mountain. These mountains are pale golden in color; their height is about a dozen meters and stretches across an area of more or less 40 kilometers. The dunes are huge and some measures about hundred meters while most of them are rather stable in shape though the dunes shift recurrently.

Day 08 Dunhuang to Liuyuan South (2 hours) to Turpan by High-speed Train (3.5 hours)
Detailed Itinerary: Today you will visit Mogao Grottess. In the afternoon, Transfer to Liuyuan Soutuan Station (2 hours). And  then take 3.5 hours High-speed train to Turpan. Chekc in hotel.
Mogao Caves: The Mogao Grottoes, a World Heritage Site on the Silk Road, is located near the ancient town of Dunhuang in northwestern China.

Karez is an unique irrigation system in dry, arid areas such as Xinjiang, Afghanistan, and Iran. The system has wells, dams and underground canals built to store the water and control the amount of water flow. There are over 1100 karez wells and channels having a total length of over 5,000 kilometres in Turpan today.

Yargul, or Jiaohe Ruins, is a natural fortress located atop a steep cliff on a leaf-shaped plateau between two deep river valleys of Yarnaz.  It was first the capital of the State of South Cheshi, which was one of the 36 kingdoms in the Western Region.  It is located 13km west of Turpan,

Emin Minaret is designed in a simple Afghani style and was built in 1777 AD by a local ruler in order to show the impressive memories of his father's contribution to Qing government.  It is also known as Sugong Pagod in Chinese.

Flaming Mountains are situated in the north of Turpan Basin. It were made famous in Chinese literature by the classic novel Journey to the West. The story is about the monk Xuan Zang and his followers who traveled west in search of the Buddhist sutra. The mountains seem to be on fire in the burning sun and become a purplish-brown color.

Bezeklik Thousand-Buddha Caves is situated at the north bank of Muzat River in Turpan, a collection of retreats once inhabited by Buddhist monks, as well as the imperial monasteries for local emperor during the Gaochang Kingdom and Tang Dynasty.

Heavenly Lake: Tianchi in Chinese.  This pristine lake is situated at a refreshing height of 1,980m and is surrounded by jagged snow-covered peaks, forests of pine trees and green meadows. The lake surface of Tianchi Lake is over 1900 m above

Xinjiang Museum: As an important place of Xinjiang Region, you can get a whole view of different folklore and customs about 12 ethnic minorities in the area, in the other hand, more than 10,000 culture relics displayed inside exclude some 11 natural corpses that preserved very well.

Day 11 Urumqi to Kashgar by Flight
Detailed Itinerary: Fly to Kashgar.  Explore the old town of Kashgar in the afternoon.


Kashgar (or Kashi) is situated in the southwest of Xinjiang. From the west, this is the first point of arrival on land routes from Pakistan and Kirgyzistan. Long a vital stop on the Silk Road, this remote city some 4000 km from Beijing.

Eid Kah Mosque lies in the center of the Kashgar, is a large-scale Islamic struture, it has over 500 years' history till now. In 1442 A.D., Shaksmirzha, the ruler of Kahsigar, had the mosque here at first and say prayers to the souls of his deceased relatives.

The Old Town of Kashgar surrounds the center of Kashgar, with the Id Kah Mosque rising at its center. Use the north-south thoroughfare of Jiefang Lu to orient yourself and then head east or west into the thick of things.

Abakh Hojia Tomb is also known as the Tomb of Xiang Fei in Inner China, the only Uigur concubine among the 41 wives of Emperor Qianlong in the Qing Dynasty (1644-1911). The Tomb is the most magnificent tomb in Kashgar, filled with history and symbolism.


The Karakoram Highway (KKH) connects the Xinjiang Uyghur Autonomous Region of China and Gilgit–Baltistan of Pakistan across the Karakoram mountain range, through the Khunjerab Pass, at an elevation of 4,693 metres (15,397 ft).

Karakul Lake: Karakul Lake is situated at the foot of Mount Muztagata which is 196 kilometers from Kashgar. It is locatd in Akto County, Kizilsu Kirgiz Autonomous Prefecture on the Karakoram Highway, before reaching Tashkurgan, the Khunjerab Pass on the China - Pakistan border and Sost in Pakistan.
At an altitude of 3,600 m, it is the highest lake of the Pamir plateau, near the junction of the Pamir, Tian Shan and Kunlun mountain ranges. Surrounded by mountains which remain snow-covered throughout the year, the three highest peaks visible from the lake are the Muztagh Ata (7,546 m), Kongur Tagh (7,649 m) and Kongur Tiube (7,530 m).
Attractions & Activities:Karakul Lake
Meals: Hotel Buffet Breakfast, Chinese Lunch 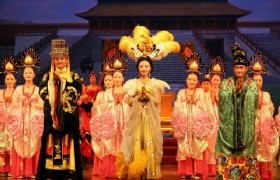 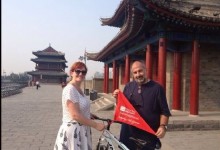 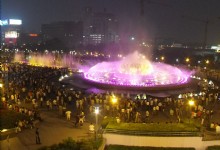 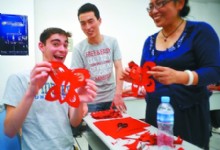 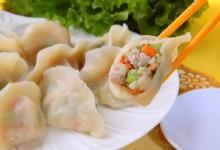 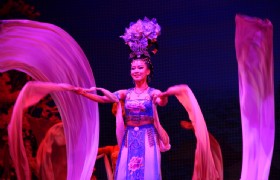 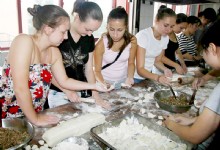