The top of the world’s roof, Mount Everest

I am afraid there is no one who doesn’t know the famous Mount Everest in the world, which is also called Qomolangma and we can see this towering pyramid-shaped mountain from postcards, magazines and even news on TV. Most people still argue about the height of Everest, 8848 meters or 8844 meters? When face to this grand mountain, look at the world's highest peak, it is completely another feeling.

Starting from Nyalam, we went along the State Road 318 and headed for the Everest Base Camp in Tingri. There are many villages along the way, and many of the walls of Tibetan houses are painted in red, white and blue, like the French’s flag, which is a sign of the Sakya school of Tibetan Buddhism. Sakya is also known as spent teaching, different from other denominations, monks of the Sakya can marry, but after having children they can not close to women.

There are many ancient ruins adjacent to villages along the way, mainly are towers and the castle garrison, most of the tall towers are also collapsed, leaving only half of a wall. It was the battlefield in ancient times. There were many wars on this channel link Tibet with Nepal. After liberating, China built the Shigatse section of 318 State Road on this old channel, re-communicate between China and Nepal and India.

the scenery on the way

Excellent weather, cloudless, though Mount Everest is still far away, but the pyramid-shaped mountain stand proudly, there are several other significant peaks higher than surrounding peaks around the Mount Everest, they are Lhoze Peak (8516 m), Makaru Peak (8463 m), Qowowuyag Peak (8201 m) and Xixabangma Peak.

The 8000 meters peaks become one line

I captured this picture quickly and copied from the camera to my laptop through the wireless network to my friends. My laptop can still work well at the summit of the Earth's high altitude. It was really a good assistant in our journey. The four more than eight thousand meters high mountains appear in a picture inspire people very much.

Our team quickly reached Gacha town, from where we go into the Mount Everest. At the front of the town, the team turned into the dirt road. The mountain road was rocky and tortuous, so our car walked slowly, we occasional spotted some marmots at the roadside. Mount Everest hidden from time to time in tall in front of the hillside. The entire road is deserted and rare human habitation. After driving for about three hours, we arrived at Rongbuk Monastery, where the vision was very good and we could look up the Everest.

Continue to move forward, there is a tourist camp between the base camp and Rongbuk Monastery, many big tents gather around and become a site, each house has his own stall, selling all kinds of fossils. After gong through the relevant procedures in the tourist camp, we drove up to the Everest base camp which is 5200 meters above sea level. Now, it is the best time to climb the Everest, excellent weather, no storm, such weather only maintain about twenty days, so hiking fans from around the world are gathered here to climb the Everest.

The most wonderful is the cloud on the peak, like a long hair.

antelope under the Everest

We left the base camp and went to Rongbuk monastery to shoot the Mount Qomolangma which was shrouded in twilight. Rongbuk monastery is the world's highest monastery, built in 1899. Because the whole buildings were under maintenance, we didn’t go into it. Outside the temple, there were a large group of yaks.

It was getting late, and the golden light around Mount Qomolangma was slowly receded and felt into twilight blue-purple, even more mystery.

We started went down, the journey was still very far, we climbed up the numerous hills and turned many corners. The stars were very bright, and the moon hadn’t rise up, the glory of the stars even buried that of the Galaxy. Leaning back, I could see stars through the window, countless stars, blue, and white. I remembered a story heard in my childhood that when great man died, they would turn into the star in the sky.

I fell asleep and had good dreams at the world's highest point. 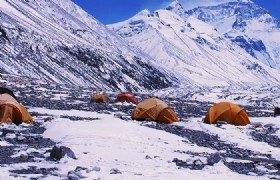 This rare Mt. Everest Base Camp tour will give you a 3-day of essential sightseeing tou... 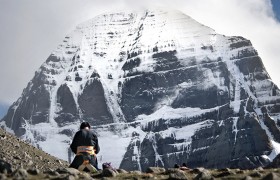 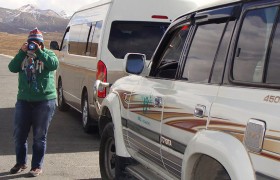