Fenghuang County is located in Xiangxi Tujia and Miao Autonomous Prefecture, Hunan Province, China. It has an exceptionally well-preserved ancient town that harbors unique ethnic languages, customs, arts as well as many distinctive architectural remains of Ming and Qing styles. 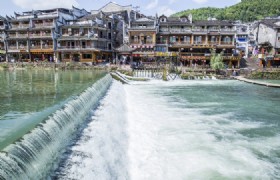 Tuojiang River, the largest river in the Fenghuang county, is one of t... 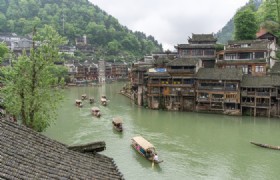 Find maps of Fenghuang, including Fenghuang's regional location to other parts of China as well as . Our Fenghuang travel guide ( includes weather, living, food, weather, transportation, etc.) has heaps of useful information and tips! > See More

There is a saying that you do not visit Fenghuang Ancient Town until you go to Fenghuang market. In Fenghuang, going to the market is called "Ganchang (赶场)". In the market, you can find not only a wide range of agricultural products at cheap prices, but also rarely-seen goods with the characteristic of Miao ethnic groups. The market is also the place where you can admire t...> See More

Located in Xiangxi Xiangxi Tujia and Miao Autonomous Prefecture, Fenghuang food falls into Xiangxi cuisine. Fenghuang people are fond of sour and spicy flavor. Its people are adept in making various kinds of food such as bacon with firewood and coal. In addition, they are fond of much salty, spicy and sour food. Their way of making salted meat is unique, fit salting away the...> See More

There are quite many ba in Fenghuang on both sides of Tuojiang River, most of them ran by people from outside. Since Fenghuang is a small county, it is not difficulty to find the some interesting ba in Fenghuang. Things to do in Fenghuang Ba in Fenghuang Small Town Story (Xiaochenggushi) Bar 古城小镇酒吧 Yuahi Ren Bar 原始人酒吧 Ancient Town Watcher...> See More