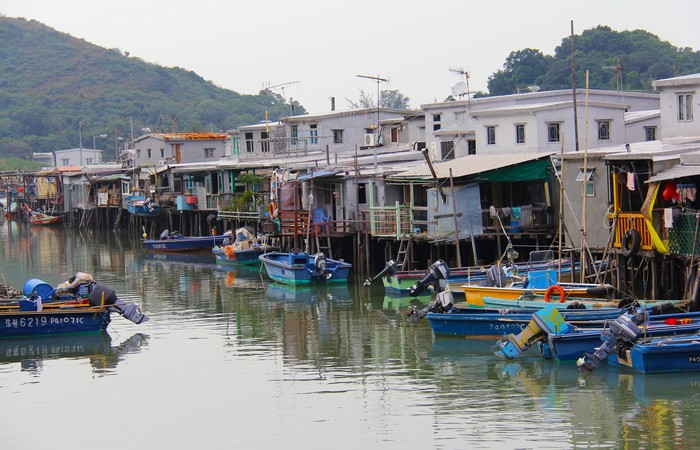 How to go to Ngong Ping

Cable Car
From MTR Tung Chung Station Exit B, you will find the Tung Chung cable car station.
We already have round trips cable car tickets of standard cabin, and you can skip the queue, redeem your ticket at the Group Ticketing Counter;  You might add surcharge of HK$85 for upgrade to round trips Crystal Cabin.  The cable car operates Daily. Mon-Fri 10:00-18:00. Sat, Sun & public holidays 09:00-18:00.

Giant Buddha
a large bronze statue of a Buddha Amoghasiddhi, completed in 1993, It is 34 metres (112 ft) tall, weighs 250 metric tons (280 short tons).  Visitors have to climb 268 steps to reach the Buddha,[2][5] though the site also features a small winding road to the Buddha for vehicles to accommodate the handicapped.

The Buddha appears serene and dignified. His right hand is raised, representing the removal of affliction.The Buddha's left hand rests on his lap in a gesture of giving dhana.

Walking with Buddha show
It is an immersive, multimedia show allowing visitors to follow the life of Siddhartha Gautama - the man who became Buddha - and his path to enlightenment.

Po Lin Monastery
Know as the "Buddhist Kingdom in the South". Po Lin Monastery is the most popular Buddhist temple in HK. The world's largest outdoor Buddha at the Po Lin Monastery becomes a site of Pilgrimage and is visited by Buddhists' from all over the world.

After visiting the Giant Buddha and Po Lin Monastery, we will go to Tai O fishing village.

Tai O Fishing village
From Ngong Ping Village, take bus 21 to Tai O terminus (approx 20 minutes) and walk for around five minutes to the Rope-drawn Ferry Bridge and then take a stroll along the waterfront.  Tai O was once the largest inhabited settlement on Lantau Island. The village's stilt houses on the waterfont, offer a glimpse into Hong Kong's past and provide a striking contrast with the modern city.

THE STILTS HOUSE
A free boat trip ride to cruise around the old fishing village is included. An highlight of the cruise is the stilts house, unusual, interconnected structures on water that form a tightly-knit fishing community for villagers to live in.

Pink Dophin Tour
In Tai O, local people offer a boat ride of Pink Dolphin Tours. The boat tour takes you through the fishing village and out to the China Sea. No tour can guarantee that you will see the dolphins, the best time is June, July and August.   You might see dolphins, jimping out of the water.

Tai O Heritage Hotel
Follow the trail in village to go as ocean-front as you can get, you will see a beautiful pier and a colonial style buiding hidden on hill.  Dating from 1902, this building was formerly the Tai O police station and one of the earliest police stations built in the New Territories. The authorities stationed police on this western extremity of Hong Kong to combat piracy and smuggling,  The building was revitalised and converted into the Tai O Heritage Hotel in 2012. The hotel includes nine colonial-style rooms and suites with sea views and a roof-top restaurant serving Tai O specialties. The surrounding cannons, searchlight and guard towers have all been restored.

Bus from Tai O to Mui Wo
Take bus No. 1 from Tai O to Mui Wo: via Tai O Road, Keung Shan Road &  South Lantau Road.  We will pass the villages of Shui Hau, Cheung Sha, Tong Fuk, Pui O.  From Mui Wo, we will take ferry from Silvermine Bay to Central Hong Kong.

Mui Wo
Mui Wo is a rural town on the eastern coast of Lantau Island in Hong Kong. The main beach in Mui Wo is known as Silver Mine Bay Beach. The town is well known for the feral water buffalos and cows that roam the area.  Visitors may also try the various delectable cuisines lined beside the Mui Wo pier.

Silvermine Bay
The name of Silvermine Bay came from its history of silver mine on the island. It only takes a few minutes from Mui Wo Pier to reach there and travellers can enjoy cycling and soak in the beautiful views of the beach.

Ferry from Silvermine Bay to Central
A delightfully different way to view Hong Kong and Lantau, while offering you the freedom to continue with your own plans for the evening upon arrival in Central Pier #6.  Both ordinary ferry services and fast ferry services are available.   The ferry ticket is not included in our quotation.

Central
Central is the central business district of Hong Kong, it has served as the centre of trade and financial activities from the earliest days of the British colonial era in 1841, and continues to flourish and serve as the administrative centre after the transfer of sovereignty to China in 1997.

The price for our addon activities is based on the fact that you have booked one of our tours.
Round trip transfers from your hotel and admission ticket are included.
Please click Free Enqury button on this page for more details.